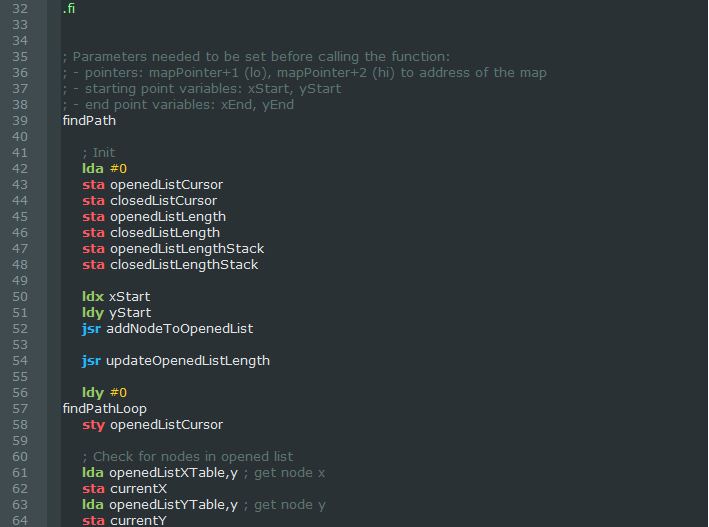 This code will help also to find the path to finish the Steel Duck game!

2016 turned out to be a very busy year indeed - but, quite typically, we told you nothing. However, we have decided to finally let you in on some of our little secrets, summing up the previous year and hinting at what's to come.

The past year raced by much faster than it should have: we were improving engines, writing algorithms, and solving problems both technical and conceptual. All this effort resulted in removing a few stumbling blocks in projects whose future had been uncertain.
Without doubt, the greatest success of the year was eliminating a bug from an adventure game project, Circus Tom. The problem turned out to be a little pixie that interfered with oblique scrolling. After many a sleepless night, the pixie was apprehended, befriended, and beliquored with gin, so that the code could be finally compiled unbeknown to him. Once the hangover had become a distant memory, we managed to make a few more considerable improvements to the game. The work will continue in 2017. With no drunken hiccups.
Another success was "saving" the Steel Duck game project in  January 2016. Technical issues connected with masking sprites on the fly were dealt with according to the "make limitations your features" principle. Currently, works on a find-the-shortest-path algorithm, made especially for Steel Duck, are advancing. Not to mention many other, minor improvements.
We're also thrilled to tell you of the progress we're making with our racing game Cryme, to which we've added bolide prioritisation and distance calculation. Not everything works as it should yet, but we're planning to complete the engine in 2017.
We are also ready with a core project for our teeny-tiny game under a working title of G-Rex (a conversion of Google's T-Rex), but we need to spend a little bit more time on it to experiment with... an online connection via Commodore 64.
So, as you can see, Commocore set off at full steam in 2017. Works on all the above-mentioned projects are under way, and we are also planning to continue developing the system for Meonlawel, and completing the engine for a very interesting side project - Lawless Legends conversion from Apple II.
We'll end with a bonus: three cherries that will make their way to our repository this year (but were, in part, born last year). The first one is a small PHP library called Petscii, helpful in transliteration and display of website content on C64 browsers (Petscii is already used on our website). The second cherry is a source and demo of find-the-shortest-path algorithm developed for Steel Duck, but of much more versatile application. We're experimenting on that as we speak (write!). The third one is a simple but functional framework for unit tests, called c64unit, fully compiled on C64 (or emulator).
Wish us luck!
Our projects
Swarm
c64unit framework
CommodoRex
Cryme
Steel Duck
U.S.S.R. League
Meonlawel
Circus Tom